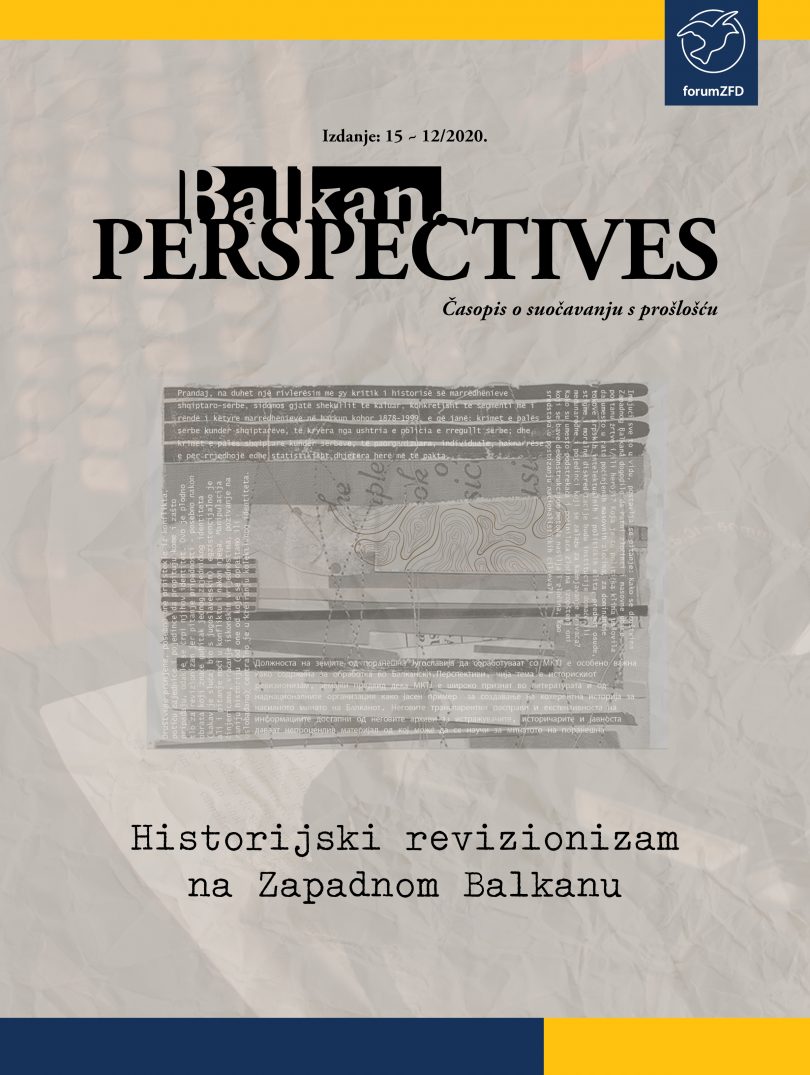 In previous editions, the Balkan.Perspectives editorial team has brought to your attention how and why history in the Western Balkans region is being contested, challenged, and instrumentalised. The (re)writing of history is not neutral, but rather a deliberate political process which seeks to establish realities and narratives and reflects the power relations at different periods in time. In this regard, historical revisionism and denial cannot solely be the normalisation of monoperspective historical narratives. Historical revisionism has the potential to build a substrate that challenges fundamental democratic achievements, revives authoritarian tendencies, and discredits initiatives that challenge an essentialist view on identities and societies through the instrumentalization of historical discourses. In such cases, the creation of a “WE” mutes voices in the process of a critical historization of a common past in favour of the creation of “THE OTHERS”.

In this context, this edition of Balkan.Perspectives adds to a pluralistic, constructive, and open discussion about dealing with the past in the Western Balkans. This commitment to a multiperspective approach both in theory and practice is a key aspect to challenge historical revisionism. It does so by acknowledging that history is deeply embedded in local, regional, and global dynamics of political, cultural, and social environments. It is bound to spatial references and to the heterogeneity of actors’ voices. Thus, multiperspectivity rejects history as an elitist project and emphasises the pluralism of perspectives, and the inclusion of diverse and reliable sources. It seeks to enable historiography to become a tool of societal reflections and dealing with a common past, grievances, and trauma in the countries of the Western Balkans.

This edition of Balkan.Perspectives features contributions from Husnija Kamberović, Shkëlzen Gashi and Milivoj Bešlin who provide a general view on current discussions around historical revisionism in Bosnia and Hercegovina, Kosovo, and Serbia. You can read Arbër Salihu’s case study on the newly developed Holocaust curriculum as an important tool for inclusive history teaching in Kosovo. Lejla Gačanica takes us on a guided tour through the interventions into Mostar’s public spaces. Sanja Petrović Todosijević looks at how the rehabilitation of Nazi collaborators in Serbia is providing grounds to challenge the past. Marko Krtolica explores the changing perception of Metodija Andonov – Chento in the nation-building process of North Macedonia in the 20th and 21st centuries, whereas Natasha Stamenkovikj critically examines the status quo of North Macedonia’s compliance with the regulations of the International Criminal Tribunal for the former Yugoslavia (ICTY).

In the name of Balkan.Perspectives editorial team, we want to thank all the authors for their important contributions and all helping hands who made this publication possible. We wish you an enjoyable read with the last edition of Balkan.Perspectives for 2020, a wonderful holiday season and a Happy New Year!