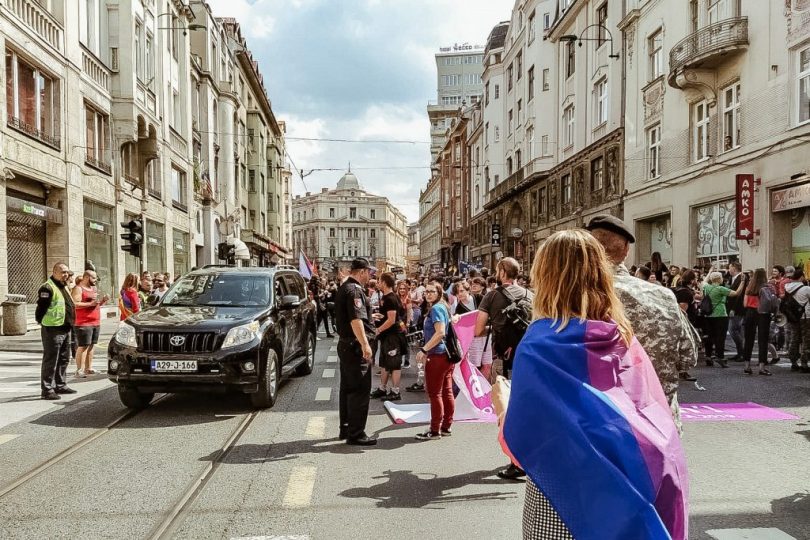 Although they represent both sides with their identity as religious and LGBTIQ persons, none of these sides really represents them. By Tanja Grabovac

In the Oscar rewarded movie No Man´s Land from 2001 director Danis Tanović used the phrase “no Man´s land” to symbolically represent the tragedy and absurdity of war in Bosnia. The same phrase can be used as a symbol for the absurdity of many other human tragedies, many of them on the same Bosnian ground. Between two fighting front lines, two opposed soldiers, Bosniak and Bosnian Serb confronted themselves wounded on the no man´s land, on the minefield.

In the post-war Bosnian society activism and fight for human rights are gaining more and more public attention. LGBTIQ community is growing, getting international support, gets public reactions, and influencing society. The growing visibility doesn´t immediately mean an alliance with conservative Bosnian society. On the contrary, the more visibility, the bigger violence and discrimination, and the need for protection in the legal, judicial, and international level. Through the past years of LGBTIQ activism, the LGBTIQ community is facing itself with the discrimination on the political and governmental level, with the disallowance of peaceful protest marches, attacks on the Sarajevo Queer Festival, attacks on activists, etc. The success of activism will be strongly linked to the success of organisation of the first Pride Parade in Sarajevo on 8th September 2019, the last country that held Pride Parade in post-Yugoslav countries.

Among critiques of this event from society and politicians, a threat from an Islamist group Wahhabis (Vehabije), the Catholic Church in Bosnia and Herzegovina also played a strong role in criticizing the first Pride Parade in Sarajevo. The Archdiocese of Sarajevo quoted: “Homosexual parades are supposedly seeking „rights“ for homosexuals and equating them to human rights. But it is all too clear that, according to Church teaching, there is no significant connection with one another… Therefore, the Catholic Church will never be able to support any claim that underlies the relativization and even the amnesty of sin. From there, she cannot support the homosexual parade or find her justification”.

In the plot of one´s previously described, confronted soldiers are representing their opposed lines and just later are coming to the point of the absurdity of their divisions, the absurdity of their confrontations. In the religious LGBTIQ minefield, persons are holding both identities from the opposed lines. They are fully representing both confronted lines and at the same time not representing any of them. They permeate both sides but also being ripped apart from both of them. They are their own allies, but also their own enemies.

Watching this relationship, these three questions from the other perspective, the perspective of the religious LGBTIQ minefield, we can come to the reverse discovery. While they are aware of the existence of both sides, their existence is hardly seen within these two sides. Second, while they also recognize the existences that surround them, they are not recognized. And third, although they represent both sides with their identity as religious and LGBTIQ persons, none of these sides represent them.

Having all these issues in overview and analysis, you can summarize this brief overview as follows: religious LGBTIQ persons are in no man’s land: a religious tragedy of religious LGBTIQ persons. This is indeed a real religious and pastoral tragedy, among many others, although many will not call it a tragedy, but rather as a defense of the traditional way. This tragedy can be understood as a deep existential tragedy of an individual person, but also as a theological, religious, pastoral, and ecclesial tragedy.

Even if one should not be overly optimistic in the search for a happy ending, an enormous revelation awaits in the religious no-man’s-land of the LGBTIQ group: the realization of the whole absurdity of all our wars and all our divisions.

You can read this article in German as well.