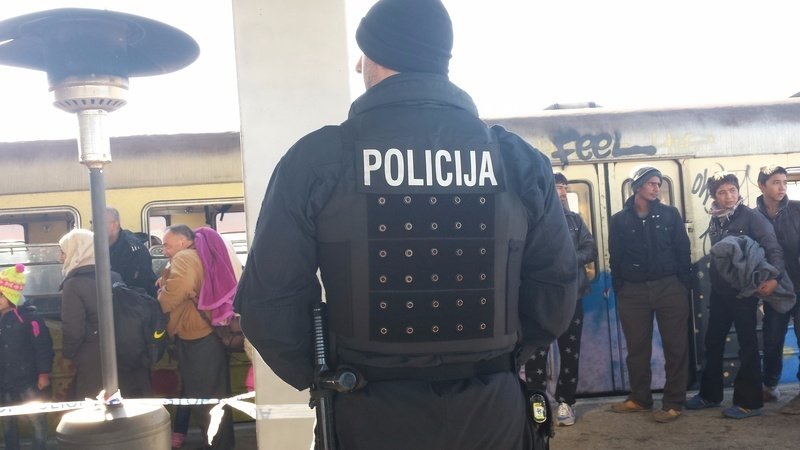 No to further militarization of security forces – use the EU money to improve humanitarian conditions of the people on the move!

As people living in this country we are deeply concerned over the continuous usage of the humanitarian and political crises related to people on the move in Bosnia and Herzegovina as an excuse for further militarization of various security forces. For any one of us who experienced the war in the 90’s, pouring money into semi-autonomous security forces such as Cantonal police, in combination with the ongoing political crisis and heightened nationalistic rhetoric, this raises nothing but red flags. Unfortunately, the EU is increasingly contributing to these processes.

Appreciating the fact that you are newly arrived, we wish to draw your attention to the fact that significant portions of the money provided by the EU for so-called “migration management” is directed towards purchasing equipment for security forces in Bosnia and Herzegovina. Rather than for the provision of humane and decent conditions for people on the move EU money is being used for the fortification of borders and militarization of police.

Also, since you represent the EU in BiH, we also feel a duty to voice our objections to the EU’s politics of closed borders. The people on the move who are stuck in BiH could not arrive to BiH without already having been in the EU. Preventing them from re-entering the EU through violence perpetrated by Croatian and Slovenian border police is both a crime against humanity and is contributing to rising tensions within BiH. We also find it the matter of deep concern that the EU has donated cages in which people crossing from Montenegro to BiH are being kept, and that this inhumane practice is being implemented within BiH.

We understand that through such actions the EU is enforcing its own deeply problematic, restrictive asylum policies and trying to protect its own borders. But as someone with a mandate for governance in BiH, we remind you that the militarization of security forces can have detrimental consequences for the peace in BiH, and that the EU is thus directly contributing to an irreversible backward slide in the country.

We believe that you are aware that the same day you donated new vehicles to the police of the Una-Sana Canton, the UN Security Council in its Resolution 2496 (2019) renewed its authorization of the European-led multinational stabilization force (EUFOR-Althea) in Bosnia and Herzegovina for another year, due to among other things, the country’s failures to meet anticipated benchmarks in peace building.

Militarization of police forces has been ongoing in both entities since 2014, with support from the EU. While various public sectors have undergone reforms, sometimes more than one, and significant cuts in budgets have taken place resulting in a complete destruction of public services, the fact is that apart from a round of vetting early on after the war, police forces have since then remained untouched and their capacities have actually increased. The ill-advised reforms that have impeded the country’s obligation for progressive realization of socio-economic rights of its citizens have resulted in greater inequalities and injustices. At the same time, police forces remain divided along both entity and cantonal lines, controlled by the local elites for political but also in some cases even personal gains.

To name a few, recent examples – in Banja Luka the police forces of Republika Srpska have arbitrarily used force against peaceful demonstrators rallied around the Justice for David movement, preventing them from demanding justice. In the Federation of BiH, the local cantonal police in the Central Bosnia Canton was used to attack women defending their right to water against corrupt privatization efforts in Kruscica. Excessive use of force has on several occasions been used against workers protesting against unlawful privatisation, corruption and exploitative wages, or against demonstrations of retired war veterans. It is also a good time to remind you of how, on 18 May 2018, the illegally appointed police commissioner of the Herzegovina-Neretva Canton used the cantonal police force to directly, and with the threat of physical force, defy an order from the state-level Security Ministry for resettlement of the people on the move across cantonal borders.

Furthermore, the leaders of the Una-Sana Canton have used the cantonal police forces to establish illegal and unconstitutional check points along the entity line of division; to conduct racial profiling; to forcibly relocate people to the Vucjak dumpsite; to restrict journalists’ freedoms, and intimidate human rights defenders attempting to provide humanitarian aid to people on the move. Just last month, the police vans donated to the police forces of the Una-Sana Canton by the EU were used a few days later for forcible removal from the public spaces of people on the move.

In addition to militarisation of the police, EU funding is being used for other forms of militarisation within the state. Namely, private security firms have been employed at the so-called reception centres for people on the move. We have received numerous reports on violence used against people on the move by employees of those firms. While the local police are at least, due to their public function, formally responsible to the public, the private security companies are not. We already have information that in the camps they use illicit weapons such as electro shockers and we have suspicions about their connection to local elites or criminal groups.

Ambassador Stattler, it is in the mandate of the EU Delegation to Bosnia and Herzegovina to safeguard the fragile peace in the country. We urge you to reconsider the usage of EU funds to support further militarisation of BiH. With increased inequalities people will be raising their voices. The police you are equipping today for “migration management” will tomorrow be turned against these voices. In a post-conflict country, still flooded with weapons, the consequences will be devastating.